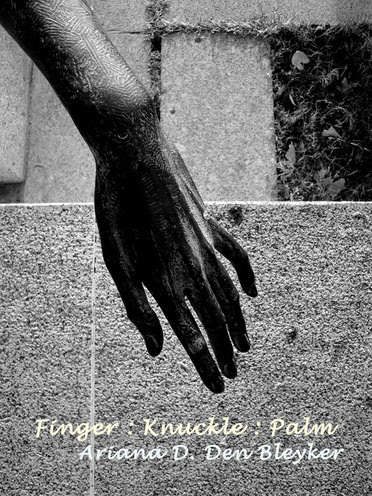 Ariana Den Bleyker’s novelette Finger: Knuckle: Palm, available free from LucidPlay Publishing by clicking on the title, organizes itself around bursts of dialogue, interspersed with single line excerpts from The Book of Job. The action centers on what appears to be the interplay between a therapist and a patient during a hypnosis session. That said, the action darts back and forth in the question and answer format, engaging the reader as Den Bleyker leads him through the darkness of psycho-analytic exploration. She wants us to explore, to ponder, and to learn. Focusing on sensation, the protagonist repeatedly describes her senses, but through the filter of the disabled: for whatever reason, each scene strips her of a sense. At one moment she is blind, the next she has lost the ability to touch and feel (even if some of these alterations are self-inflicted). Prone to emotional outburst, she leads us on a journey through her helplessness, a condition further accented by her vulnerable condition.

Thus, the reader explores the caverns of the hypnotized soul’s mind. And this exploration is not for the faint of heart, for as the action builds and the protagonist is confronted with actions she cannot understand, she seeks penance through a maniacal form of self-flagellation: “Pain spreads throughout my body as I grab the scissors with my right hand. I strike my left hand. Blood rises from my hand, runs across the counter and onto the floor. I strike it repeatedly until it severs.” Cutting off a hand is haunting, even if it is only something drumming around in the subconscious. Thus such lines show a talent for suspense.

Throughout the novelette, the unexpected surfaces, and the reader must endure torment that seems all too real. Yet these such moments evolve, seemingly ignoring the past, and expressing what appears to be a rather lucid, complex series of visions. At one minute the action is in the kitchen, only to transition to the cabin of an airplane to the street to a mirror where she watches her teeth fall out, transitions that come with little effort. Hands are there, gone, and back again. Even under the guise of a dream, the transitions are jarring at times, and while the questioning often redirects the reader, the sense of both time and place is often unclear. And perhaps that mystery, in a piece devoid of setting and exposition, is exactly what Den Bleyker aims for. She seems rooted in the metaphorical, and she therefore leaves a great deal to the imagination.

While the above mentioned transitions help pace the piece and keep the reader interested, at times I felt like I was on the outside looking in. Yes, Den Bleyker’s dialogue enthralls, taking on poetic ideas, and dragging the reader in, but at others the pacing is a bit off, for the conversation is one sided with the hypnotist volleying a never ending stream of short, pointed questions, with lengthy and descriptive responses. While I am not extremely familiar with the style of such sessions, I found myself striving for a traditional therapy session, something to augment the tone and another, deeper dimension.

Thus, while the narrative progressed, winding itself in increasingly complex circles, I wanted to see a conversation, to see an engagement. While dreams involving the loss of teeth are common, how often is one privy to a therapy session in which the patient is forced to not only discuss the indecent, but then to hear the psychobabble that provides analysis? With that in mind, perhaps hypnosis wasn't the answer (or perhaps I wanted to be fed more information), for the act is too closed off from the traditional conversational medium that one character was left too flat for my liking. When the narrative concludes in a cathartic blast that brings the events full circle, we still lack the answers and the understanding that such an interplay would provide, and while they are not needed per se, one could not help but wonder where they would take us. Either way, Den Blekyer gives one an enjoyable, mystery filled read.
Posted by Steven Stam at 7:15 PM