Published Fiction: Visages of a Queen

Visages of a Queen 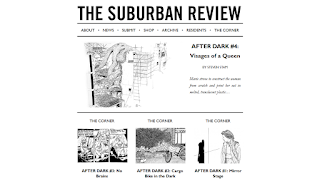 Marie scoured the internet for pictures of Queen Elizabeth II. Whether in the monarch’s young days of moldy beauty or the woman’s later years of austere blue-haired awkwardness, Marie found solace in the Queen. The candids, the lip puckers sent her into tizzies. In lieu of homework, Marie cackled for hours, imitating the faces and creating debonair smiles and frog-faces for her Camera Roll. Not that she was British. Not that she even liked idea of the Queen—monarchs and monarchies and power centered on birth all seemed far too archaic and distant—alien even. But Marie found the woman adorable, and inundated those few people she dared label as friends with texts and Snapchats attesting to that fact. The recipients never asked why and the topic never entered public conversation.
Upon switching schools, Marie capitalized on a teacher’s concerned willingness to grant her unfettered access to the school’s graphic design studio. She spent hours on Tinkercad crafting 3D-models of the Queen’s lips, her facial structure, eyes. Marie strove to construct the woman from scratch and print her out in melted, translucent plastic. Then she would share plastic floating heads, hand them out, let them all see. Even more so, she wanted to combine old eyes with young mouths, stern glares with awkward excitement—the ultimate make-your-own idol adventure. The ability to create, to digitally explore generated temporary satisfaction. When the busts came out right Marie imagined they could speak. She asked them questions about William and Charles and the lasting faults of British imperialism. The latter always received the shakiest responses, but Marie remained wary of alienating her fabricated friend.
The only window in Marie’s second floor bedroom pointed south and overlooked the weed-infested backyard of her family home. At age twelve, she’d covered the window with foil in an effort to combine her growing subversive nature with a quest for darkness. Each night, after relinquishing her electronic devices at the appointed hour, she stared at her northern wall. She imagined there was a window there and that, through it, she could gaze across the street into her neighbor Ryan’s bonus room and that he might walk by, perhaps wave. Marie conceived a conversation between the two, a shared sideways glance, and then, after a few moments of discussing her thoughts with the queens, she slept off the confused pangs of teenage wanting. This cycle defined her and marked her days as she plodded forward.
Marie’s father agreed to pull her out of private school in an effort to save her from the daily grind of what clothes to wear and where they were bought and what status the articles signified. Marie wanted to compose music, sculpt clay, melt plastic, splatter paint on a canvas. Her father didn’t care. Art school felt right, cheap. He had decided that he’d do anything to keep her from cutting herself again, anything but a week in the hospital and bandaged wrists and teacher complaints over scab picking and Band-Aid begging mid-class. When blonde hair became jet black he shrugged, when the upper ear needed piercing he gave in, the star at the base of her wrist, the star to hide a scar placated his fears. He began to trust her, to ignore her teenage whims. Yet at night, he still searched her phone scanning subtweets and photostories for cries of help. Some nights he crawled into her room. He never ran his fingers through her hair or planted his lips on her forehead, yet he longed for the acceptance of such paternal actions. Instead he caressed the queens, rubbed their jagged perms, and felt slight pangs of plastic emptiness. Always awake, Marie treasured these intrusions, for in these moments of shared secrecy, she felt loved. The Queen never spoke.