This short piece appeared in the Winter/Spring 2017 issue of Wraparound South. Thanks for the read.

Weekday Afternoons
Mother called the women Wine Sippers or Pool Boy Specials. They reminded me of lizards on the sidewalk on a sunny day, only the women didn’t retreat when you ambled near them. Instead, they came closer, threatening to slosh sour grape juice on your sleeve, into your hair. Starting in late afternoon, they lined the neighborhood streets, glasses of red or white perched in boney fingers as they glared at passing vehicles as if using the road for travel was a crime, as if driving the posted twenty-five miles per hour equated to damnation. 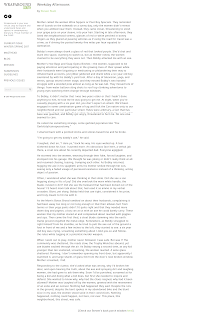 Bobby’s mom always drank a glass of red that looked purple. She’d chat and stare into space, claiming to watch us, but as mother noted, the women claimed to be everything they were not. Then Bobby attacked me with an axe.
Mother’s Hoe Bags and Soap Opera Bitches—the women, supposed to be paying attention and participating in the growing lives of their spawn while their husbands were litigating or medicating or philandering their way to inflated bank accounts, just jibber jabbered and drank while a six year old boy sauntered by with his daddy’s yard tool. After a day of television, yoga, and tennis, gossip seized center stage, and they missed Bobby’s two handed struggle with a wooded pole almost as long as he was tall. They missed lots of things: from water balloon sling shots to roof top climbing adventures to young eyes watching them change through windows.
To Bobby, it didn’t matter that I was two years older or that I hadn’t done anything to him, he told me he was going to get me. At eight, when you’re casually playing with a six year old, you don’t expect an attack. We’d been engaged in some combination game of tag and Kick the Can native only to our neighborhood and our particular street. Rules were arbitrary, a fact that has never really changed in life. But on that day I cheated: I didn’t stay in jail while base was guarded, and Bobby got angry, threatened to hurt me. No one else seemed to care.
He called me something strange, some garbled pejorative like “You Gerbilstylicaiospussotomy.”
I smarted back with a pointed sticks-and-stones based line and he broke.
“I’m going to get my daddy’s axe,” he said.
I laughed, shot an, “I dare ya,” back his way. His eyes welled up. A tear slithered down his face. I taunted more. An obnoxious face here, a verbal jab there, a cruel one about his recently departed dad. Everyone agiggled.
He stormed into the women, weaving through their fake, forced laughter, and stomped into his garage. We thought he was joking or didn’t really think at all and resumed chasing, teasing, trumping each other. As Bobby returned, hugging the axe in his spaghetti arms his mother smiled through her son, seeing only a faded visage of perceived existence instead of a thinking, acting object of passion.
Often, I wondered what she was thinking in that smile. Did she see a son hopping along in fits of joy? Did she overlook the worn white handle, the blade crusted in dirt? Did she see the husband that had been kicked out of the house? I’d heard mom talk about that, had used it as ammo in my verbal crusades. Blunt, yet sharp, Bobby held that axe tight, considered it his prize, and truly meant to hit me with it.
As the Mom’s Botox Brood rambled on about their husbands, complaining it had been away too long or not long enough or that their elbows hurt from tennis or their yoga pants didn’t fit quite right and that they needed more down dog and pigeon, a boy ran at us with an axe he could barely carry. These women that my mother stared at and complained about reacted with giggles and sips. Then came the first thud, a steel blade slamming into the earth. Damp ground engulfed the metal edge. Somewhere, as Bobby struggled to right himself from his stumble, as he tried to pull the axe out of the ground a foot in front of me and a few inches to the left, they started to see: a six year old boy was crying, screaming something about I-told-you-so and follow-the-rules while tugging at a potential murder weapon.
When I went out to play, mother never followed. I was safe. But was I? The community was sheltered, the roads slow, the Trophy Wenches abound, yet axe blades vaulted through the air. As Bobby swung a second time, as any kid younger than ten scattered, screaming, the women reacted. A wine glass shattered. Running, I don’t remember opening my front door, but apparently I slammed it, and large shards of glass fell from the door’s now broken window. Mother screamed, I hid.
Responding to the clamor, she’d asked what was wrong, why I’d broken her door, and upon hearing the truth, about the axe and spraying dirt and laughing women, she had gone to ask them why. Soon I’d be punished, screamed at for being a kid and doing what a kid does, but first she needed to inquire and defend. She wanted to know why, why had the chaos reigned, why had it been allowed? Mother was laughed off by the women, greeted with the resentment of an exile and an outcast. Nothing had happened they said. Despite the ruts in the ground, despite the bent spokes in my abandoned bike and the blunt slice in my seat, the women stood solid in their convictions. Nothing happened, nothing could happen, not here, not ever. This place, this neighborhood, this street, was safe.
Posted by Steven Stam at 11:49 AM