On Reading Flannery O'Connor's "A Stroke of Good Fortune"

“A Stroke of Good Fortune” confronts a popular O’Connor theme: the old south versus the new south. The former eats collard greens and has a long arm extending back into the slave ridden past, the former, has taken to the cities, and in doing so, has found civility. Ruby, the main character takes this theme head on in the opening pages, confronting the arrival of her brother home from war with distaste, for while he had seen the world, he would rather be in the faded town he originally hailed from. He wants collard greens, the comforts of home. But home represents everything Ruby has moved to divorce herself from.

She has married a Florida man, has managed to remain childless, and has found a new life. Ruby wants nothing to do with her Pitman past, striving to move forward and take claim of a new, cosmopolitan existence: “Where she wanted to be was in a subdivision…where you had your drugstores and grocery and a picture show right in your neighborhood” (O’Connor 96-97). She is happy in the city and hopes to move and advance on. Thus, she fights her past with every step up the stairs, struggling to catch her breath, struggling to be happy with her station in life, and fighting the trappings of age that are descending on her. She is a young 34 in her mind, much better than her parents, who seemed to be devoid of youth: “They had been dried-up type, dried up and Pitman dried into them, them and Pitman shrunk down into something all dried and puckered up” (99). They shrunk as a result of their surroundings, the very things that Ruby has shaken off. They had kids, she does not, they lived in Pitman, but Pitman had ceased to exist.

Each step up the four flights of stairs shakes Ruby. She consistently questions her mortality, while making pains to assert herself, to show her proper place in the world order, to show that she is better than in the others. In doing so, she seems desperate. She reaches out, repeatedly notes that children killed her parents, while also noting minor weight gain, shortness of breath, and the fact that her psychic, Madam Zoleeda, noted a long illness that would bring good fortune is afoot. From here, the plot turns on the fact that Ruby, the person who viewed children as the death of her, just might actually be pregnant. Are her ankles swollen, her midsection distended? Could Bill Hill have forgotten to take a precaution and turned Ruby into a mother? O’Connor confronts the psychological grotesque here: the horrors of a life one doesn’t want, the shock of harboring unwanted life within in you. In doing so, one can feel for Ruby, yet one cannot help but pity her in a loathsome manner.

Other posts on the The Complete Stories include “The Life You Save May Be Your Own,” “The Geranium,” “The Barber,” “The Wildcat,” “The Crop,” “The Turkey,” “The Train,” “The Peeler,”“The Heart of the Park,” “A Stroke of Good Fortune,” “Enoch and the Gorilla,” “A Late Encounter with the Enemy,” “The River,” “A Circle in the Fire,” and “A Good Man is Hard to Find.”  If the book interests you, please use the link in the first paragraph or click the picture to support my efforts when you purchase the text.

Posted by Steven Stam at 1:41 PM No comments:

Book Review: The Perks of Being a Wallflower

While not a new book, I read Stephen Chbosky’s The Perks of Being a Wallflower after becoming enamored with the film of the same name that came out in 2012. While I took a long time to finally see the movie, I made mention of it in class and a well-read, annotated copy of the book showed up the next day.

As expected with any text in the teen genre, Chbosky tackles the typical teen issues: love, lust, loss, sex, drugs, and as a central theme for the text participating in life. Written as a series of first person letters, the novel centers around Charlie, a rising high school freshman who exists on the fringes of society and specifically teen life. Not only does he not fit in, he does not understand what fitting in entails, how to approach the idea, or how to really go about his days in general. He is the kind of guy that walks home for an hour rather than tackle the social dangers of the bus, the kind who sits alone at lunch because he has no place. Thus Charlie is a Wallflower, always on the outside looking in. His peers in general do not like him. He goes about his day almost as a wisp invisible to those around him and mocked by those who do see him.

In fact, Charlie writes his letters to a friend of unknown name or character, a person he thinks would want to listen only because the friend did not take advantage of a girl when he could have. Charlie recognizes the fact that he does not and will potentially never know the friend, and thus he spills his fears, thoughts, and emotions to the friend. Charlie details the suicide of one of his few middle school friends, his growing accidental but growing attachment to a group of seniors (Patrick, Sam, Mary Elizabeth, et al.) kind enough to invite Charlie into their group of wallflowers, and the emotional trauma associated with the loss of his Aunt Helen.

From here the novel follows an awkward sense of discovery, one that is as beautiful as it is awkward. Characters stumble down predictable paths, deal with real world themes, but do so through the innocent lens that Charlie proffers. At the urging of his English teacher Bill, a man who grows to love Charlie, Charlie undertakes an odyssey of literature. This literature, classics that prompt Charlie to think and consider all stages of life, gives Charlie an escape while all the while urging him to participate in life. Charlie stumbles upon Patrick’s homosexuality, specifically as Patrick is in a room with the school’s quarterback, a relationship that is both taboo and doomed to fail. Charlie falls in love with Patrick’s stepsister Sam, someone who loves Charlie too, but not in a romantic way, at least not at first. As expected he undergoes a lot of firsts, ranging from drugs to dances to sexual encounters, but he does so through the veil of emotional damage. Like a Holden Caulfield, there is something wrong with him, but unlike Holden, who never finds an answer, Charlie under goes his catharsis, deals with genuine demons, demons that would haunt any and all, and comes out all the better.

Favorite Lines:
If you intend to purchase the book, please consider supporting this blog by using this link:The Perks of Being a Wallflower

Email ThisBlogThis!Share to TwitterShare to FacebookShare to Pinterest
Labels: Book Review, Literature review, Stephen Chbosky, The Perks of Being a Wallflower

The Skora Fit: A Shoe Review 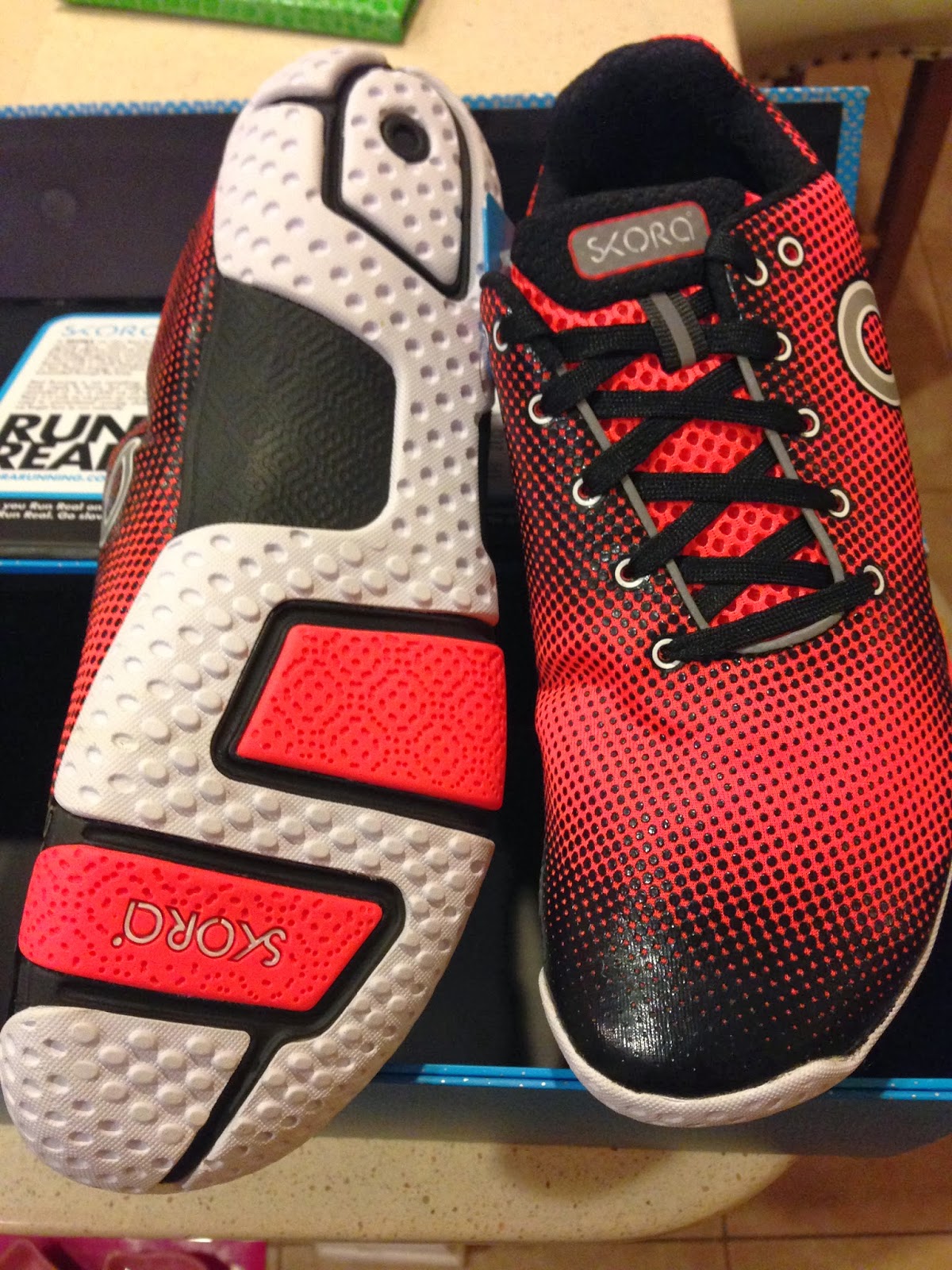 Skora produces high quality, neutral shoes, and they have done so for over two years, having recently held their second anniversary sale. Their past models include the Skora Phase, the Form, the Base, and the Core, all zero drop shoes with a neutral platform. But as the company continues to grow and evolve, they have created a trainer that has unique quality and appeal. Recently, I received a sample of the Fit, a shoe the effectively replaces the Base while marrying it with the Form. After running in a 5 mile road race in them on March 1, 2014, hitting a casual 33:47 and the a 15k of 64:11(The Gate River Run)  a couple weeks later, I have fallen very much in love the shoe.

The Fit takes everything I like about Skora and improves on it. First off it is a trainer with the RO1 platform, a platform that is thick enough to allow one to navigate all surfaces, and I mean all—gravel, grass, road, track, pine forest trail, mud, drainage pipes, yes I run everywhere, have all been privy to my testing—without giving up the feel of the surface. While I love using the Phase and Core for speed work, the RO2 sole always limits me a bit with a virtually non-existent stack height, it is a bit too thin for my running style and build to use every day. So the Fit with the RO1 sole that has long been my favorite really helps. I can run with confidence on a daily warm-up route that encompasses many of the above surfaces, and feel confident while in a zero drop (the platform from heel to toe is level), low stack height situation.

Secondly, the Fit mirrors the build of the Form, my go to shoe for the last year, but instead of leather, Skora has presented a synthetic material that breaths much better in Florida humidity (yes February in Florida is humid and April has proved to be more so). While I've never thought the Forms to be hot per se, even in August heat of Florida, the Fit is cooler and I can notice the fact. The seamless upper has a cushy feel, an embrace that is much welcomed, and it is built with a flex that can accommodate different foot shapes. The shoe works well with my wide feet and has a wide toe box, a key ingredient in preventing blisters and allowing your feet to run the way they should: without having your toes smashed together.While this is not toe box of the Core, by far Skora's most roomy model, your toes can move freely and are not scrunched together.

That said, the inside of the shoe has a significant amount of comfort, having a 16mm stack height, which while it may not seem like much, is by far the thickest of all Skora's models. The RO1 platform is a bit more hidden than on the Form, and the shoe has more of a flexible platform feel: you feel what you need to feel while receiving ample protection. Don’t get me wrong, this is not an ultra-padded, neutral shoe the companies like Altra put out (shoes which have their place), but the shoe offers a strong build and springy comfort, especially with then new 3D printed upper.

Pros:
Cons (all of these were initial and have essentially ceased to be concerns):