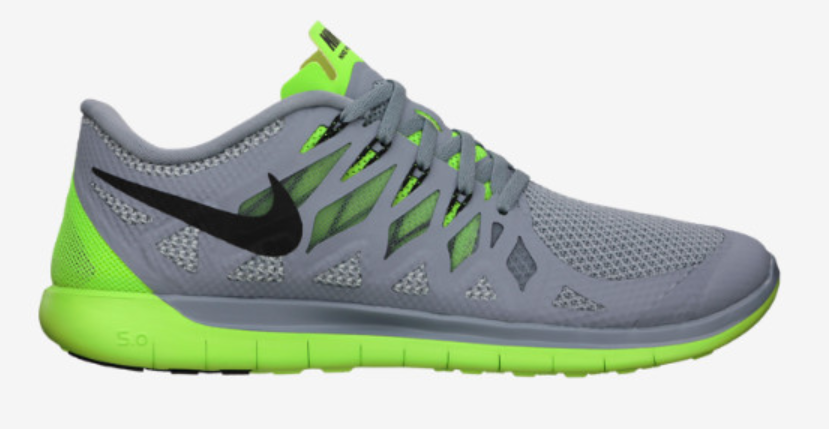 Even though I run primarily in zero drop footwear, I do make an attempt to rotate shoes around and run in some different styles to rest certain parts of the body and spread stress around. With this fact in mind, I have used the Nike Free Running shoe for many years as a flexible, lightly padded alternative. It may not be a minimalist shoe per se, but it has positive attributes, and was in fact my first foray into the market of non-traditional running shoes.

While Nike has many different models to choose from, the Free Run 5.0 (and its cousin the Flynit) is the one you will find on the shelves at many of your stores, and since I have broken down my older models, I picked up a pair and worked them into my routine. Unfortunately, unlike some of the past models, this shoe lacks some of the features that made the Free Run desirable to me.

First off the shoe is narrow, much narrower that one would expect, and I find that toe box has been cinched in as has the shoe on a whole. While older models were not Altra or Skora wide, they were accommodating to the foot, allowing the toes to spread out and function while in the shoe. This shoe is not as functional, the toes are a bit crammed and the toe piece has decorative features that remove breathability. With a wider foot, I find that my pinkie toe isn’t as engaged and I have a more angular landing pattern and thus altered pronation. Adding to the issue, the shoe narrows in the center and considerable stress was place on my outer metatarsal bone, causing some rubbing and aching. While this has abated over time with stretching, one doesn’t want to deal with such an issue in a properly sized shoe.

That said, the shoe is still hyper flexible. It allows your foot to move, and if you have narrow feet, the above issues are of no consequence. They have copied some other companies (like Skora) and created a rounded, more natural heel to create more natural, footlike stability, and the foam rubber on the outsole has a bit more durability to it. The new hexagonal approach to the bottom removes the wings that used to protrude out, giving the shoe an overall clean look while maintaining the shoe’s desired traits.