While dwelling in the Sci-Fi genre, Orson Scott Card’s Ender’s Game confronts the duality of man, and Jung is on full display throughout the text as Andrew “Ender” Wiggin works to walk the tightrope between good and evil for the sake of humanity. In the future, man has survived two waves of invasion from buggers (eventually identified as Formics in a later set of books). These “bugs” think differently, look differently, and have far superior technology to that of man. They represent the classic other, the creature that is not us and therefore the enemy. Humanity is on a mission of kill or be killed, but this mission is largely concealed from the reader throughout the text.

Instead, we witness the battle school in all of the glory that Scott intended. This school and the games that take place there started as a short story where he reimagined battle and military training in general. At zero gravity, orbiting the earth, in constant competition that would make any fantasy sports geek drool, and pushed to their limits—these are the rules governing the commanders of the future. Thus children are plucked from their mothers’ arms at the age of five after being monitored for the years prior, and once placed in school, they are pushed to think and understand the world in a way that no one ever has before, and in doing so they can take down the bugger enemy, if and when the invasion fleet arrives.

Told from two narrative perspectives, the first being that of Graff who is pushing and molding Ender to live up to his name and commit the mass genocide that is to come, and that of Ender himself (flowing in an out of first/third person), the narrative prompts the read to question the costs of the safety of humanity, what would we do to protect our planet, and should the other be destroyed. Ender himself dithers on the last thought, for what makes him perfect for this job, what will allow him to standout in the battle against the buggers and in later chapters of this saga, is the fact that while he is ruthless, Ender possess the capability to think like his enemies and in the process become them. When attacked in the shower, he responds as his advisory would, working to fight in the same way, in the same manner. When pushed to his limits, he ends things, because well he is tired and wants the games to end, the confrontation to be over.

Outside the main story arc rests the cold war era theme of west vs. east, the quest for world dominance that seemingly never ends. While humanity fights the common enemy of the buggers, they merely wait to fight each other as well. In such a place, with such a universe, the purpose and meaning of everything is questioned as the pages rapidly fly by.
Posted by Steven Stam at 7:02 PM No comments:

I started wearing the New Balance 890v5 out of necessity—I developed a case of Achilles Tendonitis (literally let a small injury, almost a niggle, develop into something more) that is pressure sensitive. Thus anything that is tight at the heel or any ankle collar that is positioned at the wrong angle aggravates the heel and makes my runs unbearable. After a trip to a local running store where one of my friends pulled out every shoe labeled as neutral in the store, I landed in this model and worked it into the rotation as an effort to rest the Achilles and avoid tension based rubbing. 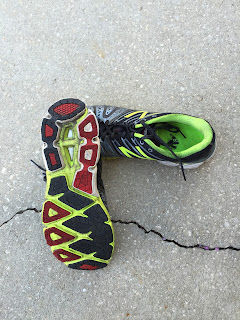 My initial impression is that the shoe is a bit puffy at times. I typically run in a shoe with a lot of feel, and while this shoe is fairly low profile with an 8mm heel drop, the shoe itself masks much of what you normally feel. When you hit a thick root that is great, but the puffy padding (Ortholite® Premium insoles) soaks up a lot moisture. After a recent ten mile venture in the Florida heat, I could hear the squish, squash and feel the water pooled in the toe box. This added weight can be burdensome and tiresome in general.

At this point I have put around 100 miles in on the shoe on mixed surfaces—some road, some trail, some beach, some bridges. The shoes has held up well, as the pictures show there is very little wear and tear minus the rubbing of a logo off of the insole. The padding, despite the moisture soaking properties, feels new and the neutral ride allows for a flat landing—your foot does not sit an angle and you can land how you want to. A flat landing is key to me—I do pronate, but my whole foot landing is more flat than anything. 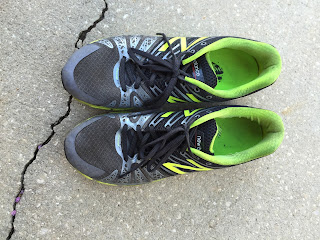 While my review is not perfectly positive it is not negative on this shoe. It serves a purpose, when dry is quite light, and holds up well. That said, the lack of feel and flexibility may be the detraction here. Perhaps a solid 7/10 would mark the rankings.

Posted by Steven Stam at 4:01 PM No comments:

Amber Sparks and Robert Kloss, complete with illustrations by Matt Kish, combine to write The Desert Places. This terse novel of just eighty-seven pages artfully explores the confines of evil, the hunger that is the devil or Satan or ill nature and intent in general. Born from nothing, never fully named, but only expressed, this essence hungers for something, and upon watching the birth man from primitive primate beings, the idea quests man with an unflinching eye.

Thus we follow the exploits of evil, the want and desire to consume and devour man from the earliest days to the bitter, post-apocalyptic end. The entity explores Eden, Gladiator Games, and the technology ridden present (and future), and of course the ultimate destruction that is coming at the hands of our great weapons of mass destruction. At the center of it all, the create hungers and hungers. This hunger consumes Christian martyrs and the corpses of mass extinction alike. Did it wish us dead, did it hunger to corrupt, or did it merely want to ingest? These questions rest at the thematic center of this work, one that is both creative and artful. A text that you can read in only an hour, The Desert Places makes you think in an innovative, literary manner.

Posted by Steven Stam at 7:29 PM No comments: