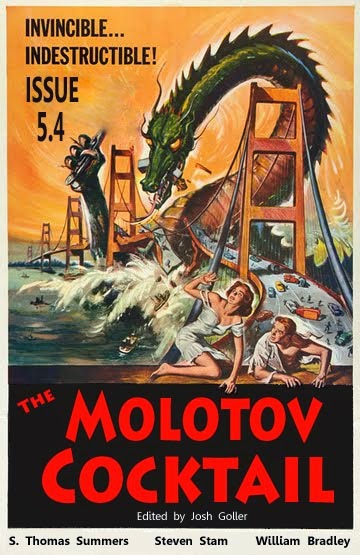 One of my very short pieces of fiction, Wintergreen Flakes, was recently featured in issue 5.4 of The Molotov Cocktail: A Projectile For Incendiary Flash Fiction. This piece details the odd life of child who at one point found pleasure in licking metal objects while focusing on a paternal conflict stemming from such oddities. The piece grew out of an exercise with a writing friend, where I aimed to connect five, one-hundred word pieces of flash together into a unified, but loose piece of flash. Result one is seen in the link above, the most current incarnation (for the piece has and continues to find more life), now with a sixth part, has been pasted below. Enjoy the read.


Wintergreen Flakes
When he was five, Jake licked the bars of wrought iron fences. Rust flakes often lodged in his teeth, stained his tongue a rotten orange. His mother shrieked at the sight, collapsing, writhing. Bits of her spittle landed on Jake’s nose; her nose trickled blood.
Later his father beat him, punched his face a speckled mess of red, yellow, and orange. The man blamed the boy for his mother’s seizure, her tears, fractured skull. As Jake lay in pain, he thought his tongue hurt most as metallic spears leached into his salvia, flooding the space with perceived wintergreen flavor.
#
His composition notebook was titled: “The Secrets of the Universe According to Jake”
1.     Do not call him Jacob; he is not a prophet (yet).
2.     Always eat mint chocolate chip ice cream twenty-seven minutes before bed (eat the chips first).
3.     If one plans to go blind, do so by staring at the sun and feeling your retina burn into a pewtered abyss.
4.     Ingest six Wintergreen Lifesavers daily.
5.     There is nothing more horrifying that a shower sans hot water. Flesh should not pucker in unison. Goose bumps are revolting.
6.     Under no circumstances should one lick fences.
#
After surgery, Jake elected to go three months without communicating with his father. The goal started at three years, but after ninety days, the Jaw-wire came off eliminating his excuse. The procedure came at his mother’s behest. She wanted to straighten her son’s jaw, returning his mug to a pre-beaten state. After, she basked in his renewed beauty.
The father grunted, cracked his knuckles. They bore scars from punches and teeth he’d both broken and repaired. He loved his wife and tolerated Jake. He would no longer touch him, if only to keep her healthy and happy. Life entered a multiyear holding pattern centered on paternal awkwardness.
#
After two years of college, where he studied foreign affairs, Jake took his scholarship money and purchased a paint sprayer. He was feeling a bit randy and sick of academia. His affairs were to remain locally situated. With a few fliers and a staple gun, Pewter Green Painting launched.
The logic remained simple:
1.     Fraternity houses throw parties
2.     Parties mar walls
3.     He could paint walls ad infinitum.
Instead of wet pain, his signs read fucking wet paint. Thus his product was born—cheap paint jobs with a sense of humor. Usually they gave him cheap beer. His mother, father remained ignorant.
#
During the Rorschach test of his court mandated psychological evaluation, an evaluation stemming from threatening to fight a police officer who was placing a boot on his pewter van due to parking ticket accumulation, he noted that everything, all shapes, resembled Wintergreen Lifesavers. The fact that the ink was black added to the game.
He’d eaten onions for lunch and now wanted to feel snowy freshness inside his mouth. The sugar, the metallic taste, reminded him of his youth, of his rules, of his need to ingest. The psychologist’s transformation from perplexed to irked to inattentive stoked his flames.
#
After the van had been towed away, after the paint sprayer clogged beyond repair, he took a borrowed tent into the wildlife preserve near Fraternity Row. From time-to-time, Jake would bathe in Sunday-morning kiddie pools, paddling among hungover feet. The students called him that guy or painter guy, and fed him pizza bones and rotten fruit. They remembered his work, his repairs. Despite his legendary status, they dreaded becoming him.
Jake thought about his youth, reflecting on iron fences and bicycle spokes and school desk legs, everything he used to lick. Life had been simple and calm then, somehow free.
Posted by Steven Stam at 3:42 PM