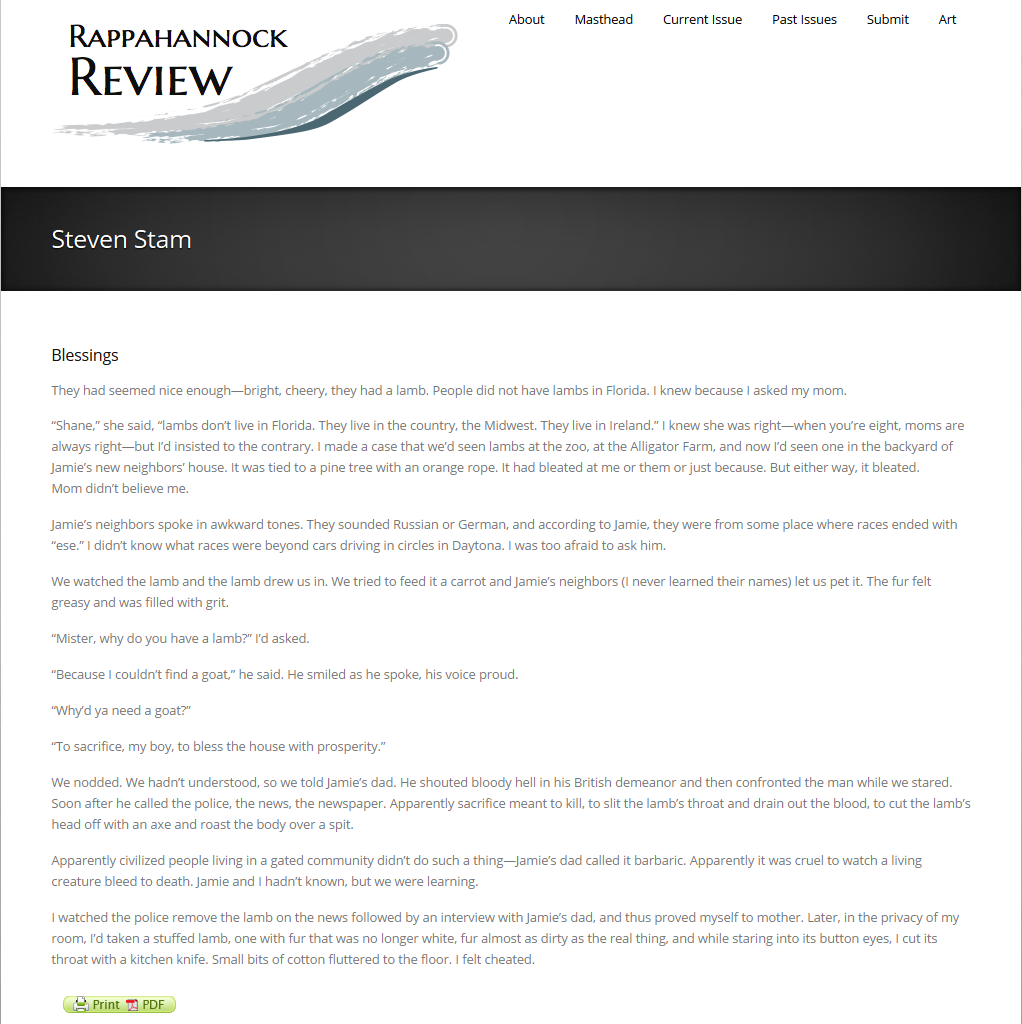 This piece appeared in the Rappahannock Review in Spring 2014. One of my recent favorites, it is fairly conventional as it explores isolation, misunderstanding, and animal sacrifice through the eyes of a grade school child. There is also a short interview on their website discussing the piece.

Blessings
Jamie’s new neighbors had seemed nice enough— bright, cheery, they had a lamb. People did not have lambs in Florida, I know because I asked my mom.
“Shane,” she said, “lambs don’t live in Florida. They live in the country: the Midwest, in Ireland.” Despite the fact that Ireland and the Midwest were two different locations, I knew she was right—when you’re eight, moms are always right—but I insisted to the contrary. I made a case that we’d seen lambs at the zoo, at the Alligator Farm, and now I‘d seen one from Jamie’s backyard, his side-yard while kicking a soccer ball, and even from his bedroom window. It was tied to a pine tree with an orange rope. It had bleated at me or Jamie or its masters or just because, but either way, it bleated. Mom didn’t believe me.
Jamie’s neighbors spoke in awkward tones. They sounded Russian or German, but according to Jamie, they were from some place where races ended with “ese.” I didn’t know what races were beyond cars driving in circles in Daytona. I was too afraid to ask him. I didn’t want one of his looks, the kind that stared through me and pondered why he allowed me to hang out with him. Eventually he would stop allowing me to, but that wouldn’t happen for some time.
We watched the lamb and the lamb drew us in. We tried to feed it a carrot and Jamie’s neighbors (I never learned their names) let us pet it. The fur felt greasy and was filled with grit.
“Mister, why do you have a lamb?” I’d asked his neighbor.
“Because I couldn’t find a goat,” he said. He smiled as he spoke, his voice proud.
“Why’d ya need a goat?”
“To sacrifice, my boy, to bless the house with prosperity.”
We nodded. We hadn’t understood, so we told Jamie’s Dad. He shouted bloody hell in his British demeanor and then confronted the man while we stared on. Soon after he called the police, the news, the newspaper. Apparently sacrifice meant to kill, to slit the lamb’s throat and drain out the blood, to cut the lamb’s head off with an axe and roast the body over a spit. Apparently civilized people living in a gated community didn’t do such a thing—Jamie’s Dad called it barbaric. Apparently it was cruel to watch a living creature bleed to death. Jamie and I hadn’t known, but we were learning.
I watched the police remove the lamb on the news, tugging on the orange rope as if the creature were a dog. The scene was followed by an interview with Jamie’s Dad on the perils of being a defenseless animal and living next to savages. The stories proved my story to my mother. Later, in the privacy of my room, I’d taken a stuffed lamb, one with fur that was no longer white, fur almost as dirty as the real thing, and while staring into its button eyes, I cut its throat with a kitchen knife. Small bits of cotton fluttered to the floor. I felt cheated.
Posted by Steven Stam at 4:29 PM