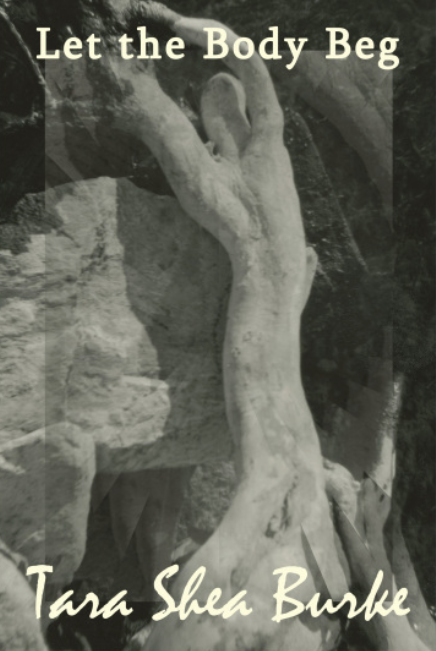 Typically I am not a poetry guy. Some poems dig into a singular feeling, focusing on a moment or a place, an image or a thought. These works like to linger about dancing on a single spot, cutting a hair over and over for lines and lines. Tara Shea Burke’s chapbook Let the Body Beg, from ELJ Publications, hits you with a fast paced selection of verse that moves you between spheres of understanding and existence. The reader is transported from one end of the emotional spectrum to another. One moment concentrates on a middle school aged girl falling in love only to later expose the reader to revulsion that accompanies such romances. To our delight, emotions are completed, life is cycled through.

Starting with the initial poem in the collection, “Hunger,” Burke digs into the heart of human desire. We hunger for so many things—yes food, but there is so much more, so much more innate and primal hungers as well complex, pensive ones. Yet, man is deeply afflicted, for in many of us there exists the converse: those people who hunger for nothing and struggle to actually exist. Thus Burke sticks the two at the same table, an interaction that allows the reader to not only view the conflict, but to also see both sides to such an issue, one that society avoids at a damaging cost.

Later in “Test,” Burke ponders faith. She questions the body’s needs both physically and spiritually in the guise of a barefoot sleepwalker strolling on ice. Beyond the obvious physical anguish, the reader must confront the narrator’s need and quest for survival on a spiritual level despite the fact that she is lacking in faith. Once again we are treated to both sides of an issue, examining the equation in full.

Throughout the text, Burke furthers the exploration of our position in life, first confronting sex then the gender roles therein. She turns things on their back, proposing one truth before exposing it as another, doing so in a poetic and compelling manner. She contrasts a red lace bra against feminist values, letting the reader see it as a sex symbol to both genders but also as an object that stands out as an aberration during a discussion on feminism due to the gender conflicts it presents.

There is plenty of humor here as well, as found in “The Hungry Girls of America” where Burke explores the lost dreams of America’s girls: “One looks at tattoos on her fingers: FUCK/on one fist, THAT on the other. Unemployed.” Such lines, ones ringing with a combination of honesty and poignancy say so much while lacing the collection with a tint dark humor that keeps the pages turning and the collective message advancing. In the end, the collection seems to center on the dualities it presents, leaving the reader pondering the truths life presents.
Posted by Steven Stam at 2:14 PM 3 comments:

Stephen King’s Dr. Sleep picks up many years after the end of the The Shining. After years of emotional torment stemming from his experiences at the Overlook Hotel, Danny Torrance finds himself without a home, without a purpose, and in an alcoholic induced oblivion. In a last gasp effort, he settles down in New Hampshire and looks for redemption. This redemption comes in a similar form to that Father Callahan finds once he joins the Dark Tower series.

Danny is haunted, not only be the mysteries of his childhood, but also by the demons of his not so distant past, one that caught up with him after one to many one night stands and awkward mornings. Thus we track Danny’s odyssey through redemption, his adherence to AA mantra, and his mysterious role as Dr. Sleep at a Hospice, where, for he makes use of his shining in order to allow souls to pass from one world to the next. In a way, this section of the narrative passes as one would expect. This is not say it is cliché or uninteresting, but the series of events leads us to find Danny as we would want to: a respectable citizen living in a respectable, albeit supernatural, manner.

Built into this tale comes the True Knot, a group of spirit vampires who derive their immortality by sucking away the souls of children who shine. They have tremendous psychic ability themselves, ranging from the power of suggestion to sleep induction to shining location. The transverse the United States looking for souls to feed on while living off of their tremendous wealth. Thus they are the evil, killing kids and filling papers and police departments with missing persons data. Yet, they are wasting away, the souls of the shining, or steam, have waned over the years, and so have their backup stores.

It is pitted against this need for food where Danny, now Dan, is given the opportunity to stand as a protector, to fight back and seek redemption for his ills while overcoming the events of his childhood. He can either revert to the visage that was his father or grow into a new, more powerful man, one capable of eliminating an evil and saving a little girl, one who shines far brighter than even he, Abra Stone. King, as always, writes a strong narrative, and the narrative pulls you through.

Abra is a believable teen, but her emotions are not always as strong as one would expect—she is in fact too grounded at times. Andi, who is giving an entire early chapter to be both introduced and then inducted to the True Knot, is underutilized. Here is a woman who can put you to sleep with a single whisper and after her introduction, she becomes a flat character with a casual mention. One would have thought she would play a larger, more crucial role in the narrative.   Similarly, the True Knot faces a crisis, yet how long has such an event been in coming and why? The problem comes off as almost manufactured, almost out of nowhere, and perhaps too simple for a group of such power. As the narrative progresses, Dan stands tall, as one would expect, and he faces his demons, giving a thrilling, page turning tale that King fans should enjoy.
Posted by Steven Stam at 11:08 AM No comments: