On Finishing a season: Running the Real Race

After months of training, my runners have entered the post season environment. The air is electric, the urgent nature is apparent. These kids have gone through multiple phases of training that honestly have lasted since last summer, if not longer. They built a base for cross country starting in

June, they worked on their lactic threshold and built a speed game, they tapered for the post season, the girls took home a state crown, and then they took two weeks off. Enter track season. As November expired, they worked to renew their base, as January came in lactic threshold training began, but we still pushed, overdoing it—early season races have little substance beyond confidence and tired legs created mental strength—then we started training to race, and now we taper.

Districts are days away and it is run well or go home time. Cliché or not, anyone who had ever seen the Rocky movies felt the urgency of hearing “Eye of the Tiger” blast over the stadium loud speakers. If you do not place in the top four, you are out. You ran a 4:36 mile, you better beat the two guys breathing down your neck. That was the scene for our last workout. Nothing we did today mattered for districts, but it mattered more today. All we could do was maintain our fitness, but we chewed through the track. We said hit your 3200m pace on 800m runs, you hit it. Hit your mile pace on 400’s, you did. Run with a person you will race near, you grabbed on with your imaginary rope and didn’t let go. God forbid someone walked across the track—where we once yelled track, we now barked, daring them not move and feel the freight train or urgency coming their way.

Pontification aside, they have their eyes on the prize. We have run weekly meets for two months, not one of them means a thing. This week we are racing, run well you live on to next week, another chance to achieve on your home track for the second week in a row. Fail to understand your race and you get an early off season to rest up and prepare for cross country. As I posted in my article on daily and weekly goals (also published by Skora Running), every run has a purpose. Every time we spent half an hour working on core and doing leg strengthening has come down to this week. All the pain, all the suffering, was for now.

You may be asking how does this apply to you? Almost every runner races—races are sacred 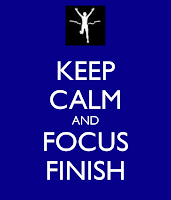 in a way—and this week were these high school kids are getting their chance to advance, represents the end of a journey to their sacred event. When you work to your 5k or half marathon and see those workouts on your training plan, remember how each moment builds to the moment you are standing at the line waiting for the gun. They are not something to groan over and complain about, but rather means to an end. Attack them. Be excited, recognize the process, and when you get to your race, treat it like a race and not an event. Understand that there are no second chances, no going back. If you fail to meet your goal, you wait until next year. District track is once a year, so is the Turkey Trot Half Marathon. Never forget it and race your heart out.
Posted by Steven Stam at 5:59 AM