Thanks to the folks over at Maudlin House (give them a few clicks) for publishing my strange piece "Misplaced Bodies." I wrote it for a contest it didn’t win, but after a few revisions I found it a home. Read it here or click over and give them some love there. 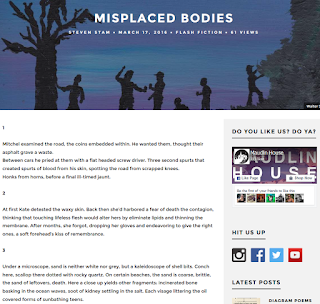 Misplaced Bodies
1
Mitchel examined the road, the coins embedded within. He wanted them, thought their asphalt grave a waste.
Between cars he pried at them with a flat headed screw driver. Three second spurts that created spurts of blood from his skin, spotting the road from scrapped knees.
Honks from horns, before a final ill-timed jaunt.
2
At first Kate detested the waxy skin. Back then she’d harbored a fear of death the contagion, thinking that touching lifeless flesh would alter hers by eliminate lipids and thinning the membrane. After months, she forgot, dropping her gloves and endeavoring to give the right ones, a soft forehead’s kiss of remembrance.
3
Under a microscope, sand is neither white nor grey, but a kaleidoscope of shell bits. Conch here, scallop there dotted with rocky quartz. On certain beaches, the sand is coarse, brittle, the sand of leftovers, death. Here a close up yields other fragments: incinerated bone basking in the ocean waves, soot of kidney settling in the salt. Each visage littering the oil covered forms of sunbathing teens.