I was really excited about these socks. First off, Injinji had done a reboot of some their products—I had gone looking for a pair of these prior to running the Goofy Race and a Half Challenge at Disney and had come up empty. I was worried about blisters between my toes by running the back to back races and wanted to wear a calf compression to make it through the marathon. That said, it took me a little bit to get ahold of them, but I was finally able to get them this week in a shipment from Road Runners Sports, and take them out for a spin.

Initial impressions:
Packaging was accessible, a pet peeve of mine is actually having to work to get into a product (see toys), and I popped the shrink wrap in seconds. The socks themselves had a good feel—they were a bit heavier than expected, but overall a solid lycra material with a nice spring in them. 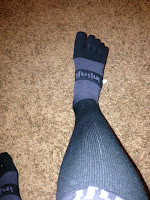 Now I’ve worn compression socks off and on for years, for races, long runs, or to expedite recovery, and my go to brand has been CEP. They have been hands down spectacular in quality and fit. The measure the calf system has been flawless and there has never been extra material. For these socks I went with my go to Injinji size: Large. I wear a shoe between 11-12 US (11 in Skora, 11.5 in Nike, 12 in Newton), so the 11-13 shoes size they suggest typically works out well—the sock fits the foot well and a minute amount of extra fabric extends beyond the toe and is not in the way. When I donned these socks, which sport gradual compression up the calf so they are tightest at top and much looser on the foot, I found the same pattern that once my toes were snugly placed, a bit of fabric extended out. Where the surprise came was in the calf portion, for I could actually extend the fabric to mid-knee height if wanted. While I was a bit disappointed in that aspect, I compensated by putting a little slack into the ankle portion (where it is looser) and pulling the sock up to desired level. 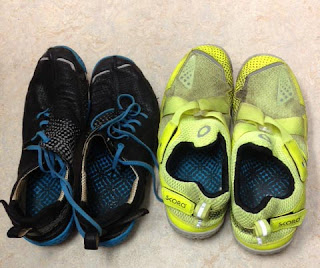 My first wear came around the house. I wore them for about two hours and without shoes. They had good traction and provided a pain free compression. They were snug, and while the fabric felt a bit thick when I held them, I did not notice any of these issues while walking around in them. They took a bit of work to get on, lining the toes up with a tighter style sock is a learned art, but they slid off with ease.

My second wear came on a five mile recovery run wearing my Bolt Yellow Skora Bases (see to right). This shoe, which has a loose fit, felt like a great opportunity to spread my toes and create an overall general impression. What I found was a very natural experience—my toes were free of the CEP compression, and my foot was able to spread out and take full advantage of the Base’s flexibility. There were no issues with pain and when removed the socks had gained taken on little water weight, thus proving to have a strong moisture wicking feature (it was in the 70’s during the run). For an update on wicking, in a later, pouring rain run, the socks felt nearly dry after the six mile workout (as did my legs).

Verdict:
Buy these socks if you want a mixture of toe socks and compression. If you are on the low end of a sizing range, consider dropping down so as to avoid having to disperse extra fabric. If I was to do it again, I would buy a medium.
Posted by Steven Stam at 7:04 AM