The Skora Form represents an aptly named, form fitting shoe put out by Skora Running and the second model I have worn from the fledgling company. I received mine on a Friday night, and threw them on for a ten mile trail run the next morning. In order to love a shoe, I have to able to feel the trail, my foot must be able to bend but not break—a rock or root should not create a sprained ankle, just another moment of increased proprioception. Heading into a trail that is pretty much rocky pine swamp, roots aplenty, rocks here or there, sand pits and the like, I knew my inaugural run would give the shoes a full test. That day, they went through stream, dirt, sand, and a controlled burn (not a big fan of the last one) with ease. After a ten mile jaunt, admittedly a bit too long for a break in run, they still appeared fresh. I had developed small blisters on top of my pinkie toes, but the form is initially a tight fitting shoe.
Composed of goat leather, the shoe molds to your foot, mimicking it, fitting almost like a glove, a process I began to notice after just a few runs. So on runs one and two, the shoes had yet to stretch and contort to the shape and feel of my foot. Since I have wide feet, I would say they stretched out to optimal width after about a week, no longer putting stress on the pinkie toes or any other sections of the foot. Since I had worn Skora Bases a little bit in the past, I knew that I would expect a zero drop shoe with a low stack (13mm in this case). The shoe had the same spongy (yet durable) outsole, of the base, a platform that grasps the ground, holds up in the rain, and slides over trail hazards. At the same time, I like a tight fitting shoe, and while the Base is a comfortable model, the Form fits my wants and needs. Such tightness is achieved with ease—you do not have to pull the laces layer-by-layer, level-by-level. Instead, the offset lacing and absence of a tongue, allow you to pull from the top and find optimal tightness from the get go.

That said, there will be other questions, especially on the leather itself. Outside of soccer players like myself, many people have never worn a leather athletic shoe. Living in Florida, a place where 80 degrees and high humidity is not uncommon, even in the winter months, the shoe has shown remarkable breathability. My feet do not perspire anymore (or less) than in other brands. The insole, which if you search you might find than many have removed it for a closer to the ground feel, gives adequate cushioning for a minimalist shoe, but if you want to run on a pillow—the Form and the Base for the matter, are not for you.


The shoe is of the minimalist vein, if you are new to the shoe type or style, you will want to take it slow. Your calf muscles will feel extra stress until they strengthen, and going gung ho into minimalist running has been shown to increase injuries for some. Work into these shoes, take a few weeks, wearing them over shorter distances to make them your primary shoe (I have been minimalist in style for over three years now). The outsole feels soft, yet Skora’s blog and social media reveals that the Form model has been worn for a thousand miles or more and shows minimal wear. These shoes will last (as a side note, they smell like leather after over 350 miles, there is no other odor). 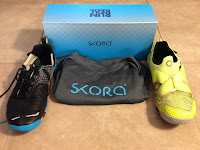 The sticking point could be price: $185 (some models are on-sale for $129). While this pricing point is controversial, remember that the shoe lasts twice as long as a standard shoe. Two $90 pairs of Nikes may take you only 800 miles or less before they become eBay fodder, thus paying a bit more for a higher quality product is warranted, especially if you can go over a 1000 miles in a single purchase. If you do make the purchase consider ordering a size smaller, Skora shoes run big. I wear 11.5 in Nike/Newton/Merrell but go with 11 in Skora. Lastly, I know I mentioned trail running above, but I have used the shoe on all surfaces—road, rock, grass, trail, and track and for lengths of 0-12 miles, for speed work, racing, and training.

Pros:
1. Great feel, light weight, and the epitome of a minimalist shoe that forms and fits to your foot.
2. Durability: The shoe will last forever, some users report over a 1000 miles on the soles
3. No odor, even after intense use. This is not a lie.

Cons:
1. Toe box: for a minimalist shoe the toe box is a bit narrow for a minimalist shoe. The new season of Skora models has dealt with this issue.
2. Price: $185. Yet they last 2-3 times longer than a $100 shoe, so you do the math.
3. Heel Strap: why is there and what purpose does it serve?